Media > Writers can use fear to advantage

Writers can use fear to advantage - Santa Barbara News Press 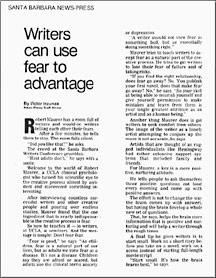 Robert Maurer has a room full of writers and would-be writers telling each other their fears.

After a few minutes, he tells them to stop. The room falls silent.

The crowd at the Santa Barbara Writers Conference grumbles.

"Most adults don't," he says with a smile.

Welcome to the world of Robert Maurer, a UCLA clinical psychologist who turned his scientific eye to the creative process almost by accident and discovered something interesting.

After interviewing countless successful writers and other creative people and pouring over endless studies, Maurer found that the one ingredient that is nearly indispensable to the creative process is fear.

So now he teaches it - to writers, at UCLA, at seminars. And the message is simple: Don't fear fear.

"Fear is good," he says. "As children, fear is a natural part of our lives, but as adults we view fear as a disease. It's not a disease. Children say they are afraid or scared, but adults use the clinical terms anxiety or depression.

"A writer should not view fear as something bad, but as essentially doing something right."

Maurer tries to teach writers to accept fear as a natural part of the creative process. He tries to get writers to lose their fear of failure and of taking risks.

"If you find the right relationship, does fear go away? No. You publish your first novel, does that make fear go away? No," he says. "So your skill at being able to nourish yourself and give yourself permission to make mistakes and learn from them is your single greatest attribute as an artist and as a human being."

Another thing Maurer does is get writers to seek comfort from others. The image of the writer as a lonely artist attempting to conjure up the muse is not accurate, he says.

Artists that are thought of as rugged individualists, like Hemingway had rather extensive support systems that included family and friends.

For Maurer, a key is a more positive, nurturing attitude.

He tells people to ask themselves three positive questions out loud every morning and come up with positive answers.

The effort is not to change the way the brain comes up with answers, but having the brain develop a whole new set of questions.

That, he says, helps the brain store information that is positive and nurturing and will help a writer through the rough times.

A final tip he gives writers is to start small. Work on a short story before you take on a novel, work on a scene instead of starting full-length movie script

"Start small. It's how the brain learns best," he says.

Your Location: Media > Writers can use fear to advantage